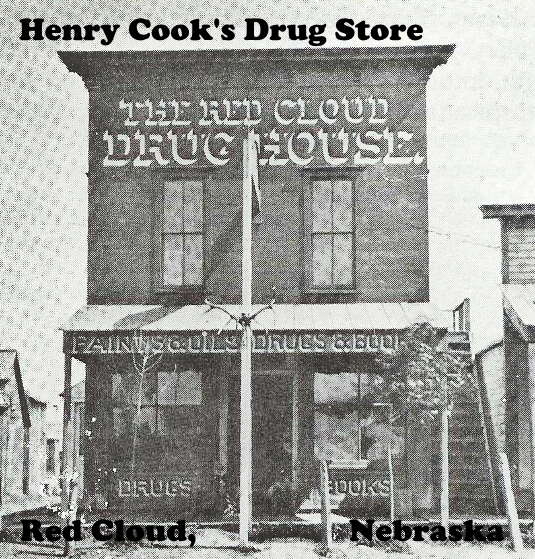 Henry Cook arrived in Red Cloud around 1880. He first purchased and began business in the Fourth Avenue Drug Store which had been built by Dr. T. B. Williams. Dr. Williams had been one of the early settlers but died in 1875. The stone facade building was located east of North Webster along the north side of Fourth Avenue. After gaining possession, he added a bath house and installed a lending library, a move to make up for the lack of a public library. 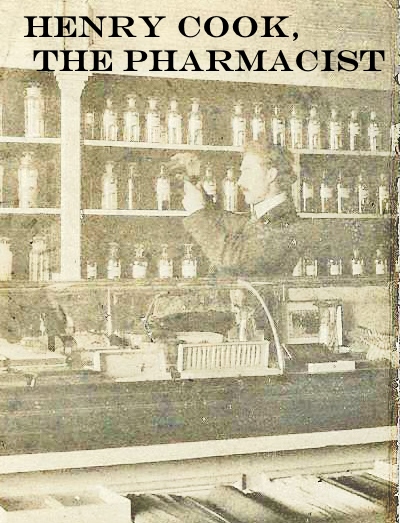 A newspaper article on the volume of business done in 1884 reported Cook to have accrued $17,000 that year and that he owned a branch store in nearby Cowles, Nebraska, as well as at least one in Kansas. 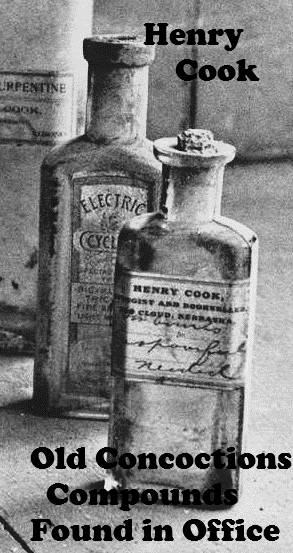 In mid-1885 he acquired more real estate when he purchased the Lutz drug store located on the east side of the 400 block of North Webster. Founded by David Lutz, this had been the first drug store in Red Cloud, as well as one of the first four businesses in the town. The price was $1,400. It had recently been occupied by J. L. Miller, the harness and saddlery man, who continued to have successful career in the community. Cook then sold his acquisition (which he had no use for) to C. H. Potter and, as agreed, Potter moved it. Cook then bought what had been the Mizer Grocery Store across Webster Street to the west, had it moved to the east side of Webster (which proved to be quite a feat), set it on a newly excavated and laid-up basement, and brick veneered the frame. After Ira Sleeper’s Carriage Works and Blacksmith Shop, this was the second brick structure to exist on the east side of Webster.