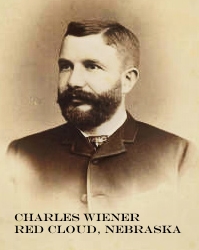 Mr. and Mrs. Wiener, a Jewish couple from New York, moved to Red Cloud in 1884. His first business venture was to purchase the north half of the State Bank building. Owner John Hay had purchased that space in September of 1883 as a location from which to conduct his business, The People’s Clothing Store. Charles, a German-Jewish clothier, took over ownership on January 1, 1884 and renamed the business, The Golden Eagle Clothing Store. He continued to operate under that name during his Red Cloud residency. However, before long Wiener decided to erect his own establishment. 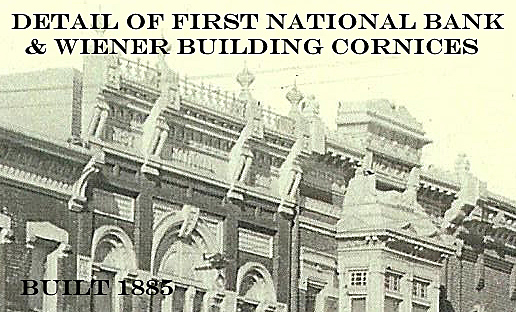 In an April 1885 issue of The Red Cloud Chief, we learn that Mr. Wiener has purchased the lot just to the north of the newly constructed First National Bank building. A wooden frame structure that housed Spanogle and Funk’s agricultural implement business was previously located there. The plans were to construct a two story brick with the first floor devoted to his clothing business and the second floor for residential purposes. By the following August, the same publication reports that things are progressing rapidly and when complete, his building will be one of the handsomest west of Omaha. A second story bay window embellished by beautiful ornamental work became a hallmark of the structure. Once complete, it and its neighboring structure to the south, the recently completed First National Bank, served as perfect architectural compliments to each other. It doesn’t appear that Mr. and Mrs. Wiener resided in the second story quarters. However, the space was available for them and some of their close friends to use for social functions.

Mrs. Wiener died while on a trip to Chicago in 1893. Charles continued to live here until 1897 when he sold the building to Charles J. Platt and his inventory to local clothing merchants, Edgar Cowden and Albert “Bert” Kaley. Sometime in the not-so-distant future, Cowden and Kaley rented the Wiener Building and conducted their business, Cowden-Kaley Clothing, there. During this time, Mr. and Mrs. Cowden resided in the second story residence. 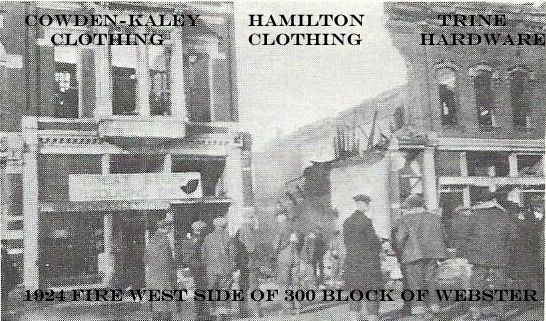 Unfortunately, a devastating fire originating in a storage room of Hamilton Clothing, a neighboring business, occurred in January of 1924. Luckily and quite possibly due to a fire wall, the Cowdens escaped unharmed. However, the two buildings located directly north of the Wiener Building were determined to be total losses. Owned by George Trine and Oscar Sattley, they respectively housed Trine Hardware and Hamilton Clothing. The businesses operating from the second stories of the ruined structures were also victims of the devastation. These were the attorney offices of E. G. Caldwell, the real estate offices of Rosencrans and Huffer, and that of J. H. Bailey. The total loss for all three buildings and their contents was estimated at $100,000. While the Wiener building did not suffer as extensive of losses as the other businesses, it had been damaged greatly. Despite his building being left with what appeared salvageable elements, the owner decided that it was in his best interest to join forces with the other two businesses and replace his building, as well. Plans for a single structure to replace the three previous structures were well established by the end of that same month.