Opening as a branch of the Chicago Lumber Company, the Platt and Frees Lumber Yard was started in Red Cloud in 1878. It was established by David M. Platt, a Wisconsin transplant, and P. M. Frees, a Chicago investor who was known to be associated with other yards across the state. Considering that an October 1884 issue of a local paper reported that about 175 homes were built in the town of Red Cloud within the past one-year period. Being in the lumber business at that time was a good thing. D. M. Platt sold his interest in 1889. This resulted in a new partnership comprised of his son, Charles J. “Charley” Platt, Frees, and George Hockwell.

In 1901 a new two-story brick office building was built at Third Avenue and North Webster Street, adding yet another brick edifice to the main street. As was the case with many of the downtown buildings, the brick used for the build came from Ludlow & Sons brick kiln just north of town along Crooked Creek. This building was destroyed by fire in 1943.

The company also opened up a branch operation in Cowles. This was run by Charles’ brother, Nathan, who later joined the Red Cloud business. The Red Cloud yard was expanded in 1910. Another generation of the Platt family, including Nathan’s younger brother, Ed Platt, and Ed’s son-in-law, Cecil Yost, continued in this same business and eventually bought out Frees. However the name remained the same until it was sold in the 1970’s. 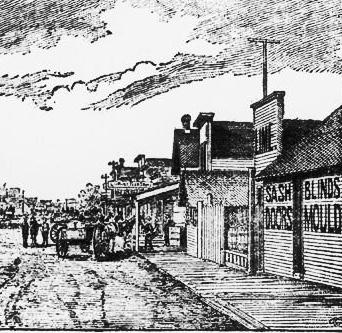 Charley Platt laid out his personal land into lots beginning in 1909. The Platt Addition to Red Cloud adjoined the western city boundary and went south from Fourth Avenue. Platt & Frees also built homes on speculation, as did many individual citizens, once they realized the need for homes in specific areas of town. An example of this was the need for more housing in the south ward. This occurred once Red Cloud was named a division point on the Burlington and Missouri Railroad in 1882. A home with materials supplied by Platt & Frees can still be identified today by examining the first riser of the main interior staircase. As shown here, it will be imprinted with the Platt & Frees company logo.