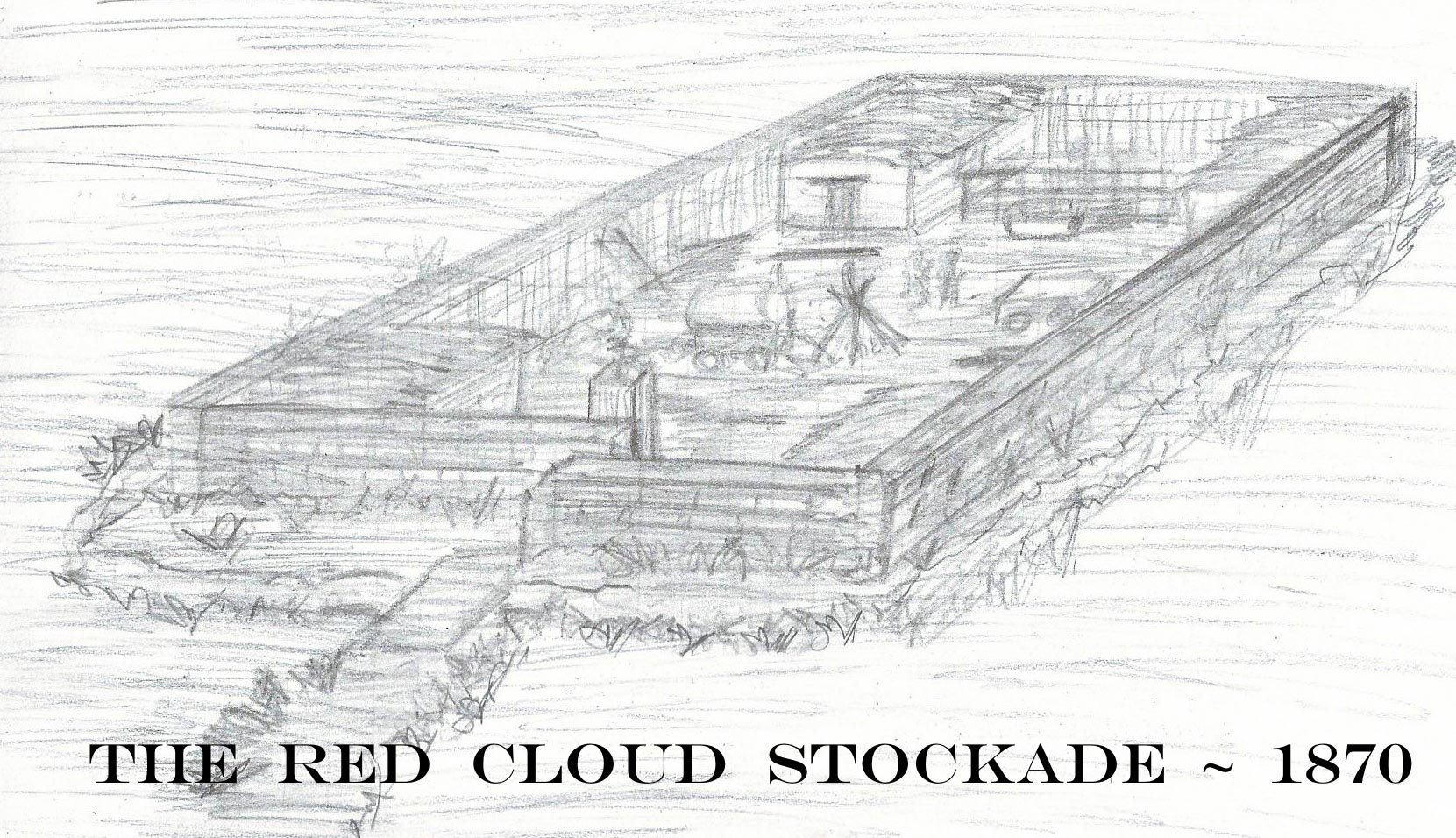 The birth of Red Cloud began on a small knoll overlooking Crooked Creek. This site was chosen by a party of nine men and was approximately 1,000 yards east and south of your current location. It was situated on land that had been homesteaded by Silas Garber, who later became an early governor of Nebraska and is considered Red Cloud’s founding father. The area’s natural prairie consisted of a mix of both short and long grasses. Since the long grasses could be six feet in height, getting lost was an ongoing concern. No roads existed to lead the way.
Fearing Indian attacks they decided a stockade was necessary. It measured 80’ by 60’ and was constructed of cottonwoods felled from two miles west along the Republican River. The 8’ high walls were covered in three feet of sod as a precaution against prairie fires and those set by the Indians. Other added measures included building a look-out tower, digging a moat around the perimeter, and utilizing a raft-like bridge that could endure heavy loads, yet be pulled in each night or when dangers arose. Old Abe, the yellow cat Abram Garber brought per Mrs. Julia Miner Jackson’s request patrolled the inside perimeters. It must have suited the tom well, as he went on to live twelve more years.

Initially, a 20’ by 15’ cabin was constructed in each of the stockade’s four inside corners. The Jackson, Penny, Calvert, and Barber families inhabited these. Two more cabins were constructed prior to winter. Twenty-six people, comprised of 13 men, 6 women and 7 children, endured the winter of 1870 here and legally established their homestead claims.
The residents subsided on quail, turkey, buffalo and deer, as well as wild grapes and plums. However, planting an early garden of lettuce, radishes, pumpkins, turnips, onion sets, and beans was reported to also provide them with an abundance of green vegetables until late into the fall.

Their furniture, with the exception of a few pieces brought in their wagons, was made of native timbers that had been hauled by oxen to Swan Creek (approximately 90 miles east), sawn into boards, hauled back, and constructed into crude tables, benches, beds, etc. Willow boughs served as mattresses and buffalo hides were utilized as rugs and blankets.

By the spring of 1871 the stockade was deemed unnecessary, and the settlers began to prove up on their homesteads and live in whatever type of housing they could fashion from their surroundings. With lumber in short supply, many chose to let the land itself answer their call by building a dugout, a cave-like dwelling that was built into the side of a dirt bank, or by constructing a sod house that utilized large slabs of the native sod that they cut from the prairie. Other homes were constructed of the area’s native rock or logs, as available. The first murder to occur was actually over an ash tree, as well as a few other extenuating factors.