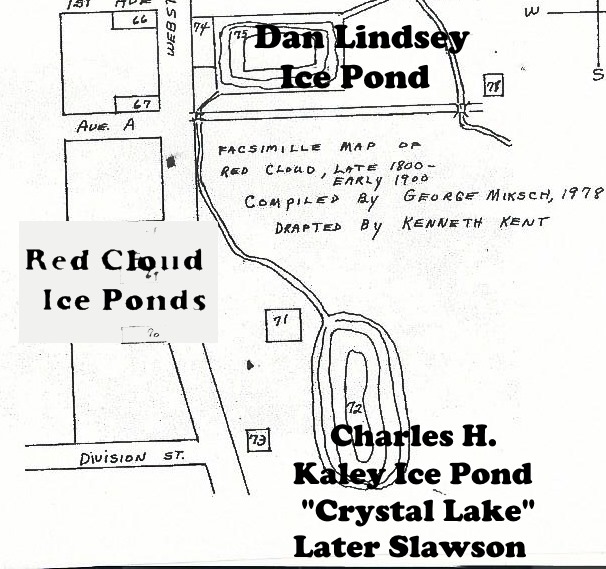 Ice was a necessary luxury. It was in demand from the growing public, numerous restaurants, grocery stores and other food related businesses, hotels, and especially the railroad. The ice business was a service in demand. The map drafted by Kenny Kent shows the local ice ponds. The upper one, #75, belonged to Dan Lindsey and the lower one, #72, was owned by Charles H. (Charlie) Kaley. Their ice houses, #’s 74 and 71, were located near their respective ponds. Kaley’s ice pond was locally known as Crystal Lake. Willa Cather, who was known to borrow local tags, included “Crystal Lake” in her writings.

Before refrigeration, ice was used to keep things cool. It was harvested in the dead of winter with giant saws often as long as six feet. After the ice had been cut into large blocks it was packed in straw for insulation; straw being one of the byproducts of grain harvests. Many of the saloons, restaurants, and hotels, as well as the railroad, had their own sometimes sizeable ice houses. Farmers, many times working in cooperation with their neighbors, would harvest and store their own.

Ice was also delivered to individual homes in town. Each residence was equipped with signs such as “10 pounds”, “20 pounds”, etc. After deciding the amount that was needed residents would place the appropriate sign in their window on the day of ice delivery. This would save the delivery men the time of coming to your door to inquire, thus enabling them to complete their rounds more efficiently. Once they knew the amount that was desired they would break a chunk from the larger pieces with an ice pick and mallet.

They then used ice tongs to carry it to the houses. 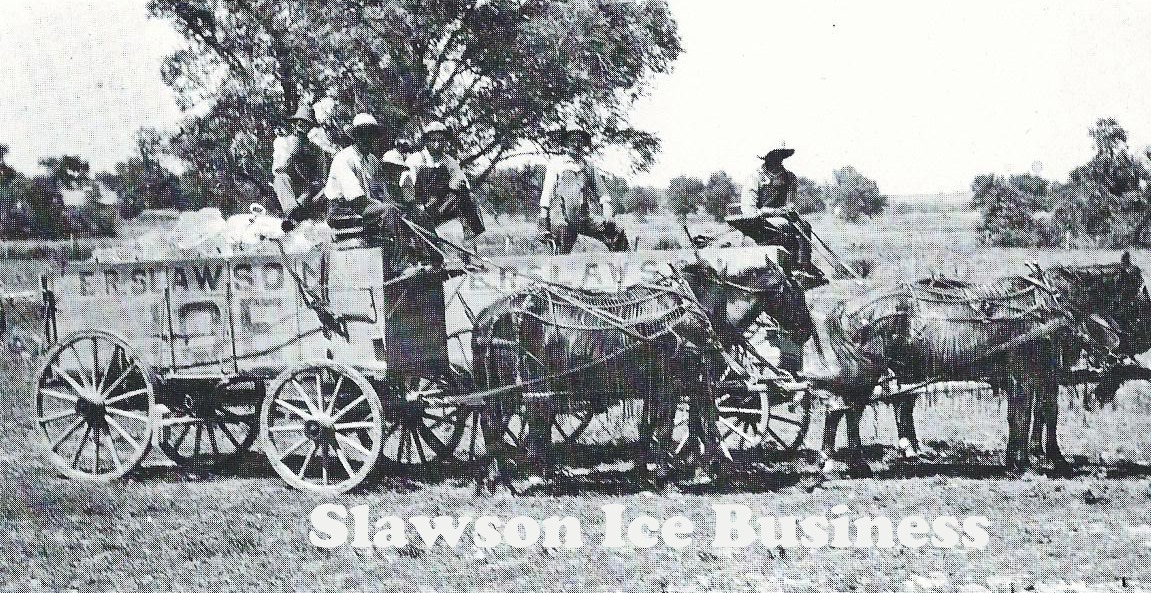 An ice service that was operating in 1888 was that of Curtis F. Evans. Another later local ice service was that of the Slawson family, who had purchased the Kaley ice business. The name of their business, the E. R. Slawson Ice Company, is visible on their wagons. Their horses were affectionately named, Nell, Lady, Topsy, and Flora. A summertime delight for youngsters along the routes was when they were welcome to the small chards of ice that broke off when the delivery men were breaking the chunks into the requested amounts.